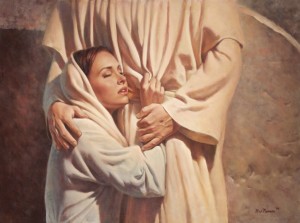 When you think about it, a lot of important events in Scripture occur in the setting of a garden. Adam and Eve in the Garden of Eden, rebelling and alienating themselves from God. Jesus in the Garden of Gethsemane, crying out to God that He might be spared of the crucifixion yet accepting it saying, “I want Your will to be done, not mine.” His appearance to Mary, as recalled in today’s Gospel lesson, in the garden of the Garden Tomb where He was buried.

Let’s put ourselves in her place for a moment. She was broken-hearted over the Lord’s death. She was anxious and distracted by her grief. Her dreams and the dreams of others – of a Messiah who would free the people of Israel from Roman rule – were shattered. Now, as she approached the tomb where He was buried, she saw that the stone had been rolled away and was confident that His body had been taken. She looked in the empty tomb and inquired of the angels if they might know where He was taken. While we speak of it so nonchalantly, she had just seen and conversed with two angels; who among us would be able to think clearly after that experience! As she turned to leave in shock and despair, she caught sight of a person nearby whom she didn’t recognize as Jesus.

She did not recognize Him! How? Why? She was a devoted follower, had spent the years of His public ministry at His side, and is mentioned more frequently in the four Gospels than many of the Disciples. Is it possible that in her story we might catch a glimpse of our own? In the midst of our Easter celebration today, is it possible that He might ask of us the same question He asked of Mary, “Who are you looking for?”

Mary was blinded by her tears. She was preoccupied with her overwhelming feelings of pain, feelings of grief, of disappointment, and of defeat. So are we when we mourn the loss of a loved one. We shed tears of sorrow as she did over the loss we have experienced. But, if our tears of sorrow are for the deceased, they can be misguided as that loved one is now experiencing the joy of eternal life. Her tears should have been tears of joy over the resurrection of her Lord. Yes, the story of Holy Week is tragic and devastating, but it has a happy ending!

A dad took his little boy to a pet store to select the perfect gift for his birthday. They looked at dogs, cats, snakes, rats, and lizards, but to no avail. Suddenly, the little boy froze in his tracks, grinning from ear to ear, pointing to a small puppy that was wagging its tail. He gleefully proclaimed to his dad and everyone in the store, “I want that one – the one with the happy ending!” Mary didn’t recognize the happy ending because of her tears. But, by God’s grace, she was able to recognize Jesus and life more clearly through those tears, tears that had become tears of joy.

Mary was blinded by her fears. On her way to the tomb, we can imagine that the past days were replaying in her mind, prompting her to wonder what would happen next. As she stared at the tomb with the stone rolled away, her anxiety likely skyrocketed as she questioned in her own mind what people would say, what she and the others should do, and what the future could possibly hold for those faithful and loyal followers. Mary was gripped with a real and poignant fear of the unknown.

There are times when we can identify with Mary’s questioning. Whether its our health, our employment, our finances, or our family, we find ourselves in an all too real and similar fear of the unknown, asking ourselves “What’s next?” Jesus promised His disciples in the closing words of Matthew’s gospel, “I am with you always, even to the end of the age” (Matthew 28:20). In the midst of those occasions when we experience trials and an overwhelming fear of the unknown, such is His promise to us as well.

Mary was blinded by her perspective. She was simply looking in the wrong direction. Her eyes and her mind were on the empty tomb. They were on the questions raised by that moment, not the answers she would find if she focused on looking to Jesus. We, too, can be preoccupied by defeat, loss, and failure while loosing sight of the victory in Christ that is available.

The actions of an elderly Scottish woman caught the attention of a neighbor. He would oftentimes witness her stopping her car at a nearby intersection and getting out of her car with a stick in her hand. Standing in the intersection, she would toss the stick in the air, pick it up as she returned to her car, and drive away. Sometimes she would turn one direction or the other, sometimes she would go straight ahead. One day his curiosity about that peculiar habit led him to follow her. As she approached the first intersection, she stopped and turned left after performing her curious practice. At another intersection, she decided to go straight.

As she approached and slowed at a third intersection, he decided he would get out of his car and find out the significance of the routine. Approaching her, he noticed the stick had landed and, quite unlike previous such episodes he had witnessed, she stood over the stick and appeared to be quite happy with herself and the inconspicuous object. When he asked her about the ritual, she explained that for as long as she could remember, she knew these roads like the back of her hand and could go anywhere she wanted with complete confidence. Lately, her memory failing, at any given intersection she would go through the simple ritual allowing the stick to point in the direction she needed to go. When the neighbor asked about her obvious glee at the result at the third intersection, she explained, “It’s really quite simple, young man. The first two times it pointed me in the wrong direction!”

That’s exactly the point! Mary kept her eyes on the tomb, pointed her in the wrong direction and almost costing her the opportunity to see our resurrected Lord. We are all too often guilty of the very same thing. When we concentrate on our past, our failures, and our losses, we risk missing the presence of the risen Christ on this day. We risk missing the joy of the Easter experience that points us to new possibilities and new life, eternal life, all because of Him.

Applying the Word to the World

What is the Good News for us today in Mary’s story? How does her example help us more fully understand our relationship with God and an appropriate response to the resurrection of His Son, Jesus? Do we gather today to celebrate the resurrection of our Lord or are we just going through the motions of standing, sitting, singing, praying? Are we truly claiming the Good News that Jesus is risen from the dead, giving us victory over sin and death, and offering to us, through faith in Him, the assurance of eternal life? Or, do we share with Mary a blindness that prevents us from claiming it as ours? Not a blindness of tears, fears, and perspective, but of our misguided joys of this day, our skewed understanding of its importance, and our modern-day misconception of whose we are and the difference that should make in our worldview and our daily lives.

I’m confident that the presence of the risen Christ is with us today. Without a doubt, He knows our thoughts, he knows our hearts at this very moment. That reality leads us to our Take-Away for today, that thought, that challenge that should stick with us long after we leave – If Jesus were to greet you in this very moment, what would He say? Would He greet you with a smile on His face, saying, “Glad you’re here, good and faithful servant!” Or would He greet you with a somber expression and the haunting words, “Who are you looking for?”